In this photo:
Alex Fenton, CEO and founder of GapCap,
a market disruptor in invoice finance.
Credits: Andrew Urwin

Invoice finance is a tool that offers SMEs ‘more than finance’: a solution to the danger of late payments.

Unfortunately for lots of small businesses, late payments are a constant pressure.

According to research by BACS, 43% of SMEs face late payments, with many of the delays stretching months.

The cost to SMEs of recovering that money reached £6.7 billion last year, up from £2.6 billion the year before.

But lots of small businesses can’t afford to wait weeks or months to receive payment from a buyer. The resultant cash shortages are a common killer of small firms.

That’s why invoice financing is such a useful tool. By helping businesses to get paid promptly it allows small firms to free up cash and focus on developing their businesses.

There are a few different ways it can work, but in general, a company sells one or more of its accounts receivable to a third party for a fee. Often the provider will pay the majority of the invoice to the business upfront – up to around 90% of its value – and then provide the remainder (minus fees) once the payer has paid.

Traditionally it is offered by banks and their commercial finance arms, such as Metro Bank, Bibby Financial Services, HSBC, Lloyds, Hitachi Capital and others. But recently a number of new players have entered the game.

Technology is making it easier and quicker for invoice finance providers to make decisions about which companies they can support.

As a result, it is one of the fastest-growing forms of alternative finance for small businesses: data firm Brismo expects the sector to grow by more than 50% this year, to £1.66 billion.

A large part of this growth is down to just one company, MarketInvoice, the online platform that links investors to companies needing invoice financing.

Its investors include individuals, institutions and government authorities (including the British Business Bank, which has now lent £160 million to more than 1,200 companies).

MarketInvoice has settled more than 36,000 trades since its inception and is growing rapidly (see chart). 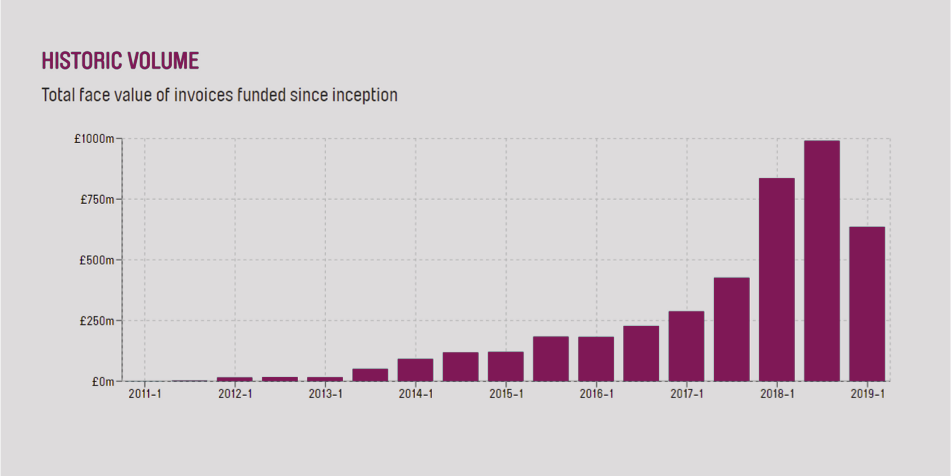 Another disruptor in invoice finance, GapCap, was set up in 2014 to help businesses unlock working capital.

To date, it has supported more than 100 SMEs.

“The UK banks are relatively hamstrung by a ‘computer says yes, computer says no’ policy”, argues its founder, Alex Fenton (pictured above), interviewed for our 100 Stories of Growth campaign.

He points out the enormous amount of data that his firm has collected on SMEs and how it could be used to manage applications and contracts in the future.

“As we’re talking to maybe 50 businesses every day about their individual problems, if we haven’t seen the cash problem that someone’s having, then no-one has.”

It’s an exciting time to be in the sector. The next few years will see more SMEs using invoice finance to improve their cash positions and help themselves grow.

We think it’s an incredibly important piece of the funding mix for SMEs, which is why in September we’ll be celebrating the Best Invoice Finance Provider at the inaugural Growth Finance Awards.

“We’re celebrating the Best Invoice Finance Provider at our debut Growth Finance Awards in September because it’s such an important tool for UK SMEs. By freeing up working capital it allows them to focus on what’s important: growing their businesses, creating jobs, and contributing to the economy at large.”