It’s hard to assess the full impact of direct lending funds on the UK’s businesses because data collection in this segment is sparse. But there are two things we can say about direct lenders’ relationship with growing companies.

One is that the volume of direct lending to SMEs is growing.

The number of companies taking loans and the value of private debt deals have been increasing – albeit with a drop in recent years – data from the British Business Bank below shows.

As banks retreated from lending to small businesses after the financial crisis, yield-hungry private debt funds stepped up their presence. As a result, there’s now far more money sloshing about.

The second feature of these lenders is that they are more active in the middle and the top of the market than at the bottom.

They usually lend to larger, more established businesses rather than high-growth start-ups. In fact there are relatively few direct lending platforms offering loans to early-stage businesses. 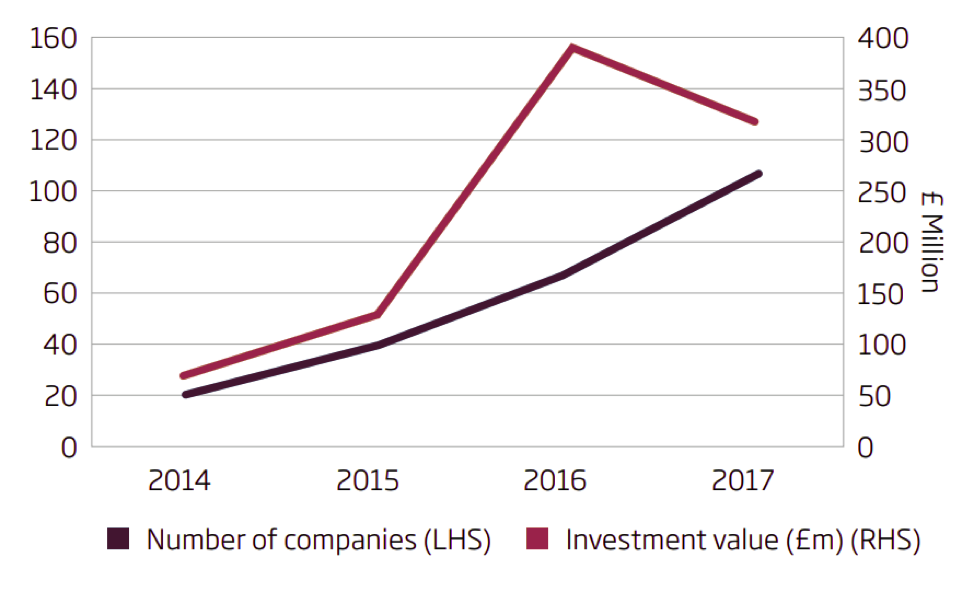 There are some clear signs of the growing investor interest in direct lending to SMEs.

BNP Paribas launched a fund focused on UK businesses last year. The asset management arm of the French bank launched BNP Paribas UK SME Debt Fund 1 to invest in senior loans to SMEs with an annual turnover of less than £50 million. It is reported to be deploying £300 million.

Meanwhile at the start of 2019, Prestige Funds’ Nucleus Commercial Finance revealed its busiest-ever quarter – extending £16.3 million in new loans. Since its foundation in 2011, the platform has now lent more than £1 billion to UK SMEs.

“Investor interest in lending as an asset class is running at an all-time high,” says Craig Reeves, the founder of Prestige Funds, adding that there is new interest in UK SME lending from investors around the world.

However, more should be done to help small businesses benefit from the capital flowing into direct lending funds.

In its 2018/19 report on small business finance, The British Business Bank recognises the “structural issues” that make it harder for funds to target smaller businesses.

The bank is trying to address the shortfall by committing £475 million to 14 private debt funds that focus on smaller businesses.

The inaugural Growth Finance Awards in September will celebrate the role of direct lenders – with two accolades in particular geared towards private debt.

The first is the Best Fund Manager, which will be awarded to a fund manager whose debt-based, alternative credit or direct lending fund has had a positive effect on UK businesses in the past year.

The second is the Direct Lending Platform of the Year award, which will celebrate a platform that’s provided a growth finance product or service that has made a clear business impact over the past 12 months.

This winner will be chosen based on a specific case study, a project or a wide-reaching service offering that has created results worthy of recognition.

If you’re involved in direct lending and think your company could win this award then get involved. We’re accepting entries until May 31.